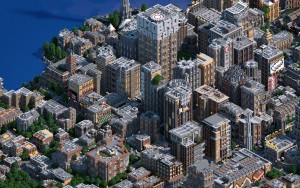 No! It’s an update to the blog! Yes I know I failed to mention the Christmas Demo when it was released, but now I’m here to post about the progress in v11.

As usual things are slow but steady. Overall progress on filling random gaps in buildings is good, it’s actually kind of hard to find an empty lot for new building ideas. While not directly related, another big thing in in the past months has been updating and revitalizing some areas that look out of place, basically they looked OLD. Things made over two years ago stand out like a cold sore compared to the newer buildings.  Another thing that sticks out (to me at least) is some of the old “landscaped” areas that consist of a few regular trees and grass placed with bonemeal, complete with the mustard and ketchup mess that are the yellow and red flowers.

Interiors lately have actually seen a huge amount of progress with the addition of a few new team members specifically doing them. It’s hard to find people who only want to do interiors (and can meet our stupid unreasonable expectations) so their contributions have been very noticeable. Loads of businesses, homes, offices, practices, apartments, hotels, restaurants, you name it. Really brings out the “life” of the city.

The amount of detail does come at a cost. Performance in some areas of the map, mainly downtown and the stretch of road featured in the first demo (Twin Pines Mall), can get pretty bad. Without Optifine installed we’re talking <20 FPS. With Optifine performance is significantly better, I definitely will be recommending that people install it before complaining to me about it.

If you have questions get me on Tumblr, and if you’re so inclined subscribe to the Subleddit.

Here are some 4k renders to play you out, keyboard cat. They’re big. 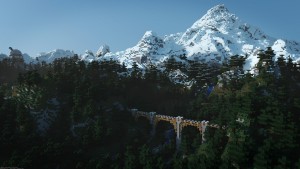 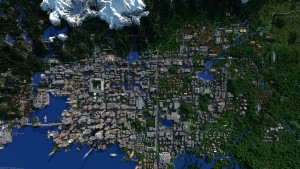